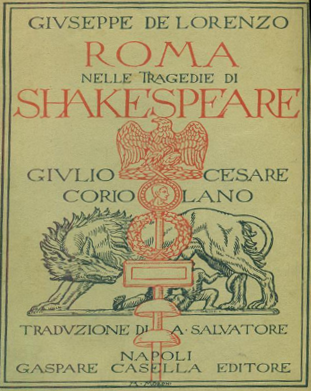 Early in 2016, Prof. Angela Tiziana Tarantini (Monash University) and Chris Griffiths completed an analysis of a 1924 Italian translation of Coriolanus and Julius Caesar. Their analysis addressed how the depiction of Rome in the translation of Shakespeare was used in support of fascist ideology in the early 1920s. The translation features a critical introduction by scholar Giuseppe de Lorenzo, which outlines a intriguing argument in which the Senecan ideal that Shakespeare found in the heroes of the Plutarch and Livy is held to be synonymous with the emerging fascist ideals of the period.